Anti lag has become a great option for eliminating turbo lag on any turbocharged engine in all forms of motorsports. We here at Brewed Motorsports use ALS in every last one of our turbocharged engines from mild street cars to aggressively tuned high boost track cars.

Drag race applications use a form of anti lag to make power when they launch the car, rally cars use another type of anti lag to keep the turbo spooled while lifting off the throttle and now even drift cars are using a “rally style” anti lag system.

Most aftermarket ECUs as well as factory ECU tuning options are now available with a simple drag style anti lag.

***Brewed Motors highly recommends the use of a Tial wastegate when using “rally style antilag”. Tial is the only manufacturer that has provided us with reliable wastegates that hold up against anything we throw at them.

Drag style anti lag systems are one of the simplest forms of ALS and are most commonly used to build boost on the line just before the race begins. This is often confused with a a 2 step rev limiter that holds the desired RPM for launching the car. (2 step rev limiter is usually activated by either the clutch switch and or a desired speed).

While a 2 step rev limiter may build a small amount of boost this is not a true anti lag system however it is VERY close. The simplest and one of the most effective drag style anti lag systems is simply a 2 step rev limiter that retards the ignition timing and adjusts the fuel just before it reaches it set rev limit. This results in the combustion cycle happening while the exhaust valves are open causing a sudden increase in EGTs as well as pressure in the exhaust manifold pre turbo, effectively spinning the turbo much faster and creating the desired boost level for launching the car.

The down side to this is that all of the added heat and pressure puts extra stress on everything in its path (exhaust valves, exhaust manifold, turbo, even the exhaust system post turbo). However, with proper tuning, the ALS can be very reliable. Using a High quality wastegate such as the TiAl Sport MV-R 44mm waste gate or MV-S 38mm wastegate will also ensure for better control of boost while the antilag system is active. 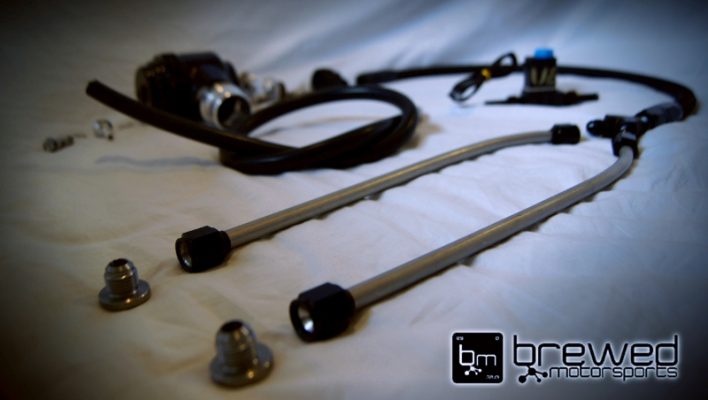 These systems are slightly more complicated than a Drag style Antilag. There are also a few different techniques and systems used to get the desired results. I will only be touching on the secondary injection style anti lag as this has proven to work VERY well for our Brewed projects as well as 90% of WRC cars (Toyota, Subaru and Mitsubishi, just to name a few).

By introducing oxygen and fuel (in the proper mixture) directly into the exhaust manifold pre turbo you can produce combustion similar to the drag style ALS without moving the oxygen through the engine (the throttle plate can be closed or at a very low angle such as lifting off the throttle while cornering). This is the perfect way to reduce the amount of stress on the engine/exhaust valves when compared to the drag style ALS as well as provide instant response when reapplying the throttle after lifting.

Thanks to the WRC regulations, many OEM cars actually came factory with this style of ALS however they were “tuned” off from the factory for the public. Cars such as the Evolution and the All Trac Celica could simply re map the ECU or use a standalone EMS and activate the OEM ALS. For those building something special we also offer a complete Secondary Air Injection Antilag system ready to keep your turbo spooled!